is a set of audio and digital stories highlighting the experiences of people whose lives have changed dramatically during the pandemic.

Nick Gibson reports for NPR’s Next Generation Radio. The global pandemic has had a huge impact on the service industry in Oregon, especially here in Portland, a city known for its lively food scene. In April, a survey conducted by the National Restaurant Association found 81 percent of Oregon restaurant workers have been laid off or furloughed as a result of the pandemic.

Shannon Chasteen loves getting creative in the kitchen.

Her passion for cooking started when she first ventured out on her own and moved into a house with a couple of roommates. As various ingredients showed up at the house, she fell in love with the creative problem-solving that goes into preparing a meal.

“That’s where I learned that cooking was something that gave me a lot of pleasure and I definitely should look into it being an occupation,” Chasteen said. “Do what you love and you’re not really working, I guess.” 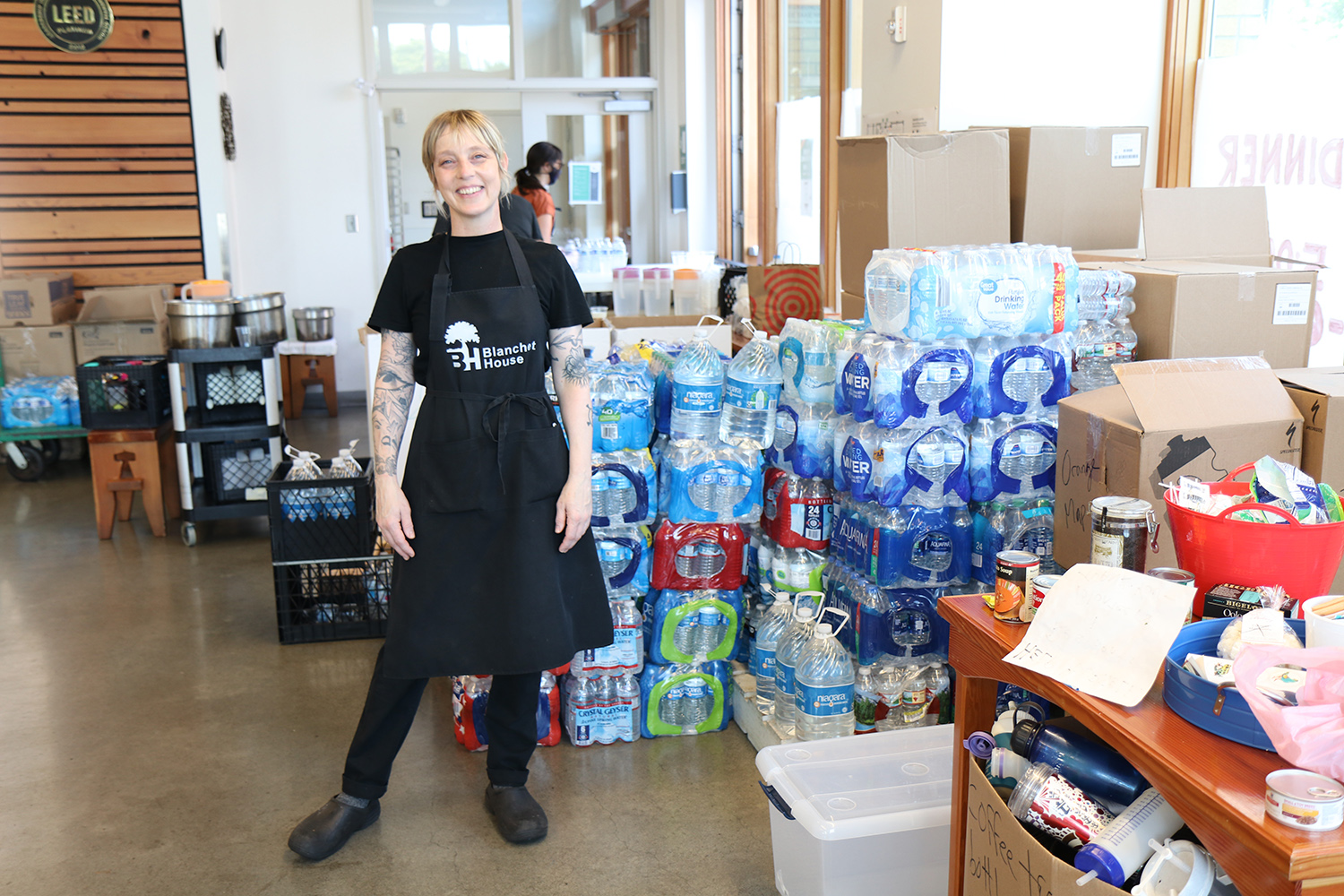 Shannon Chasteen stands in front of donated bottles of water that the Blanchet House distributes every day to help Portlanders beat the heat. (Photo by Nick Gibson)

Chasteen has been in the restaurant industry for over 20 years now. She’s worked at a variety of establishments, including bistros, farm-to-table operations, and the job she’s currently furloughed from at the Portland’5 Centers for the Arts.

“It’s always fun getting to know your farmers, admiring all the different ingredients and the produce and being able to make the most out of what you have and not taking away from the quality of what it already is.”

As chef de cuisine for Portland’5 Centers for the Arts, Chasteen is responsible for planning restaurant and catering menus, staffing, and finding ingredients for the five venues the center oversees, including Keller Auditorium and Arlene Schnitzer Concert Hall.

“That’s lots of exposure to different styles of cooking and environment,” Chasteen said. “Just a different execution for different establishments, from volume, down to the intricate one-plate-at-a-time kind of thing.”

On the day Oregon’s governor Kate Brown ordered restaurants and bars to limit sales to take-out orders and closed music venues due to rising COVID-19 cases, Chasteen was preparing for a busy night. The Keller Auditorium was booked for a Broadway show and the restaurant it houses was preparing to serve dinner. Chasteen called her crew, told them not to come in, and tried to adapt.

“After we shut everything down I tried to do a lot of things from home for a few weeks,” Chasteen said. “Recipes and writing menus and things like that, up to a certain point, but then it was eventually ‘we’re just going to step back and do a furlough from here.’”

Chasteen is one of many Oregon service industry workers furloughed due to COVID-19. In April, a survey conducted by the National Restaurant Association found 81% of Oregon restaurant workers have been laid off or furloughed as a result of the pandemic.

As one of the statistics, when Chasteen realized how much time she had on her hands she reached out to Blanchet House, a nonprofit organization in downtown Portland that provides food, clothing, and housing programs for people in need, to see if she could be of service. 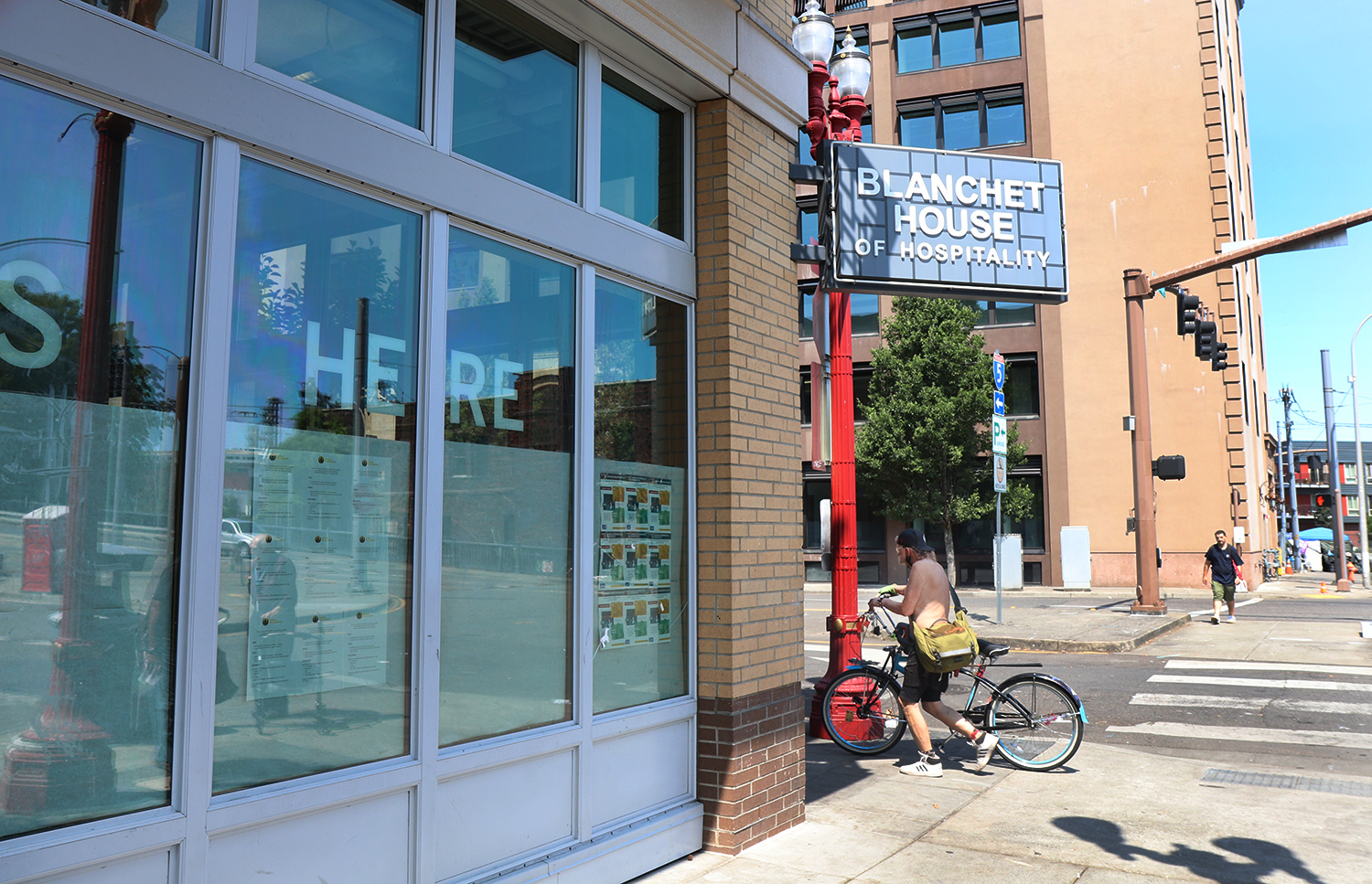 The Blanchet House in downtown Portland was established in 1952 by eight University of Portland graduates. (Photo by Nick Gibson)

Blanchet House serves around 2,000 to-go meals per day, almost double the amount it produced prior to the pandemic. Part of that increase is due to the breakfast deliveries now made every morning to Multnomah County’s three new emergency outdoor shelters and human solutions shelters.

Chasteen is still uncertain when she’ll be able to return to work, but said she plans on continuing to volunteer. 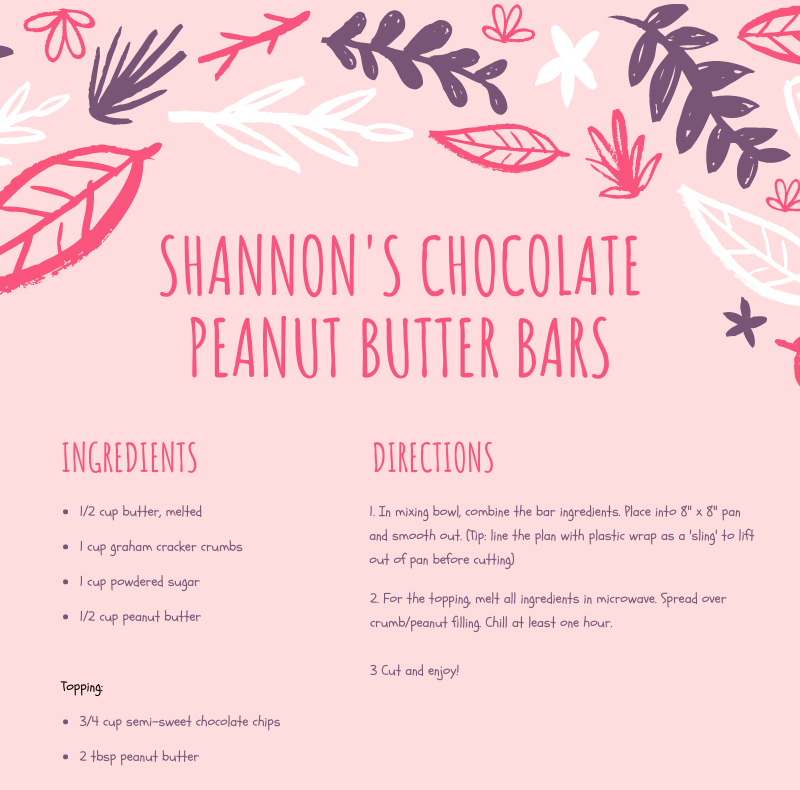 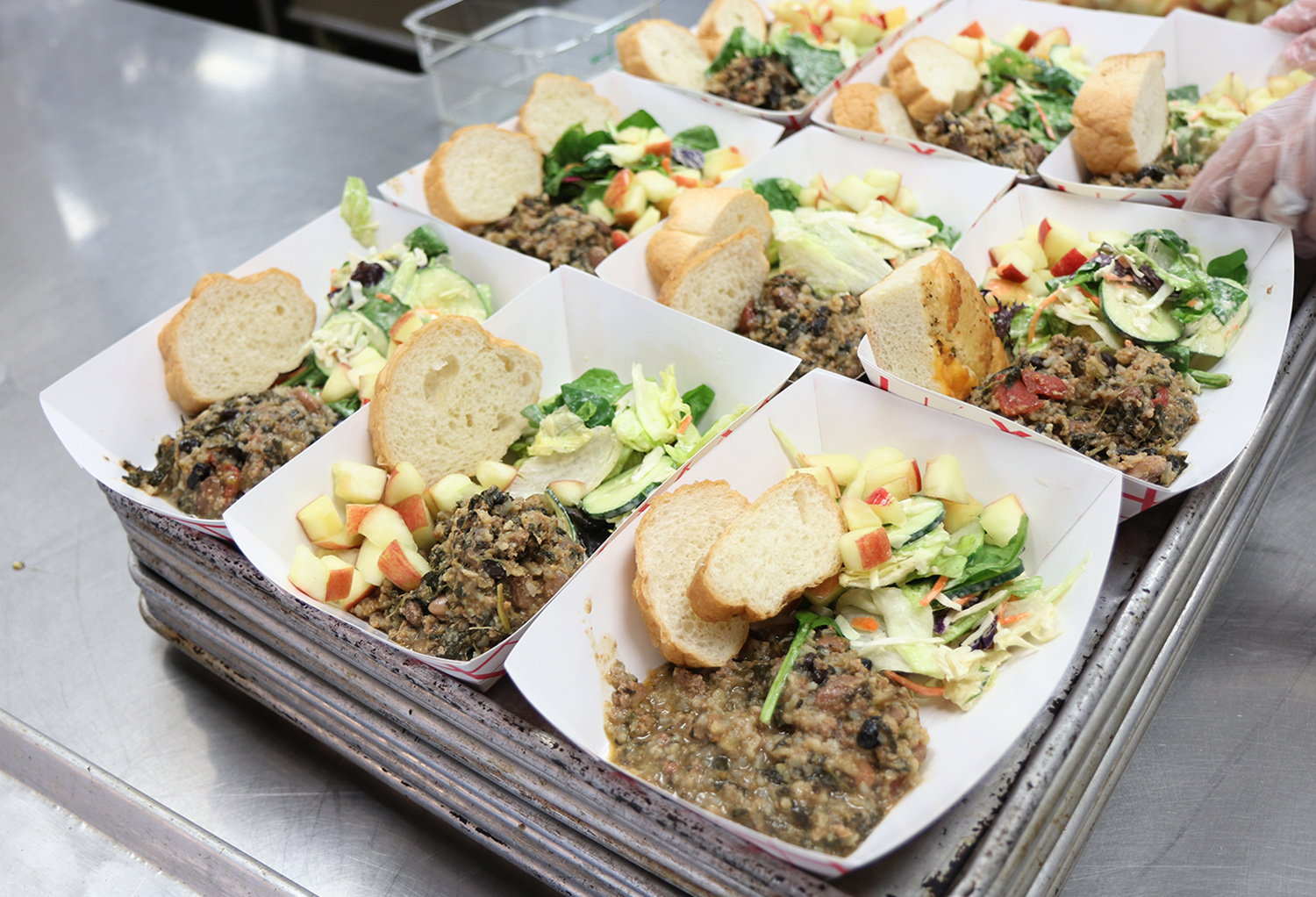 Red beans and rice served with a salad, bread and apples. Chasteen makes sure each meal is balanced with a protein, a starch, vegetables and fruit. (Photo by Nick Gibson)

Left: Chasteen calls these her G.U.I.L.T. chocolate peanut butter bars and always has them on hand in her fridge at home. G.U.I.L.T. stands for Get U Into Lots of Trouble.

“It’s been an amazing experience. I’ve definitely grown very connected to the place and people here. I look forward to putting in a good amount of time here.”

Until Chasteen returns to work, she will continue to make the most of her new found free time tending to the vegetables, herbs, and flowers in her garden. She’s also enjoyed having the opportunity to spend more time with her mom, whether it’s a pizza party or a walk through their neighborhood.

“I love to play vinyl records, that whole exercise of putting on the record, flipping it over, putting it back, picking out another one. It’s just simple things.” 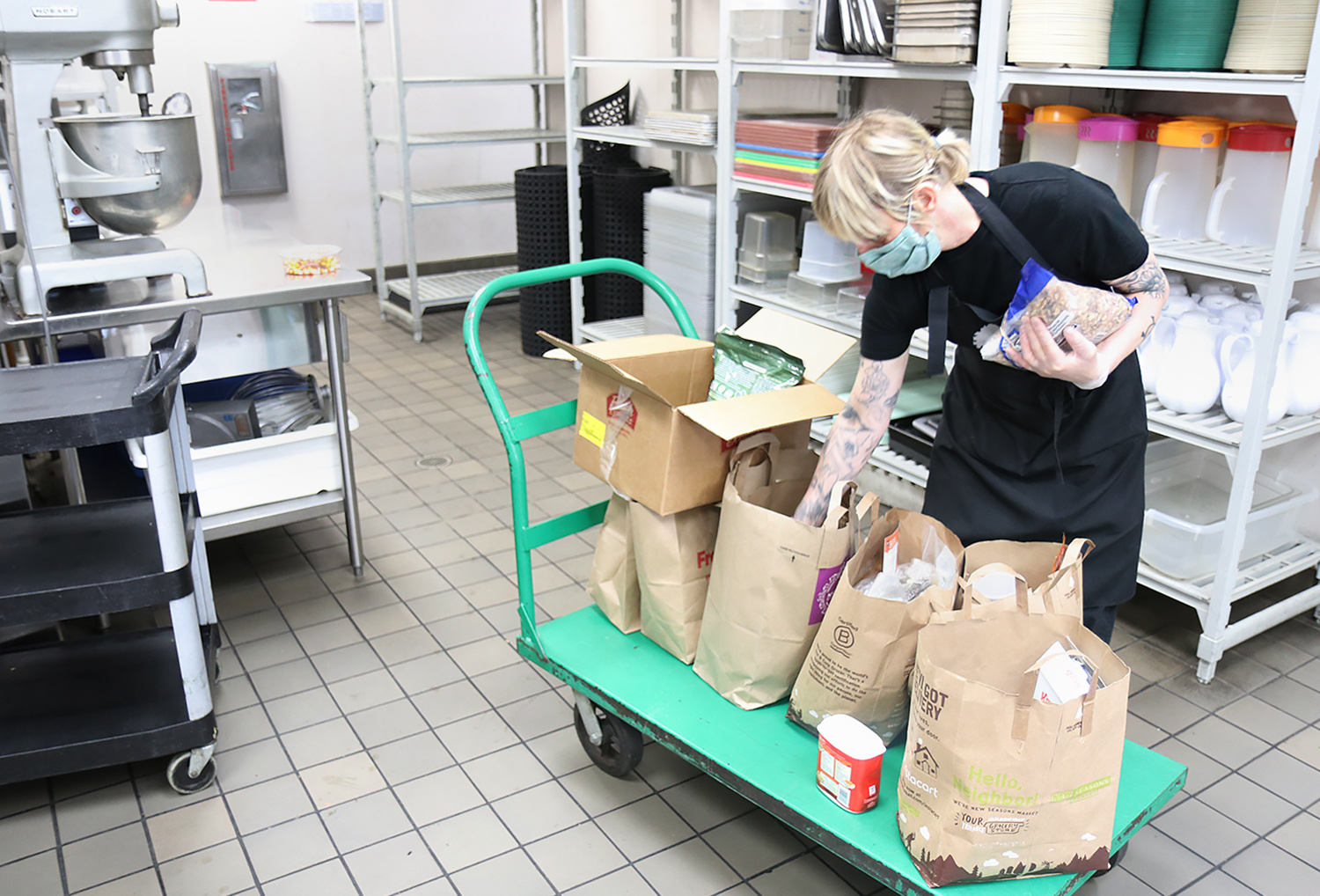 The Next Generation Radio Project is a week-long digital journalism training project designed to give competitively selected participants, who are interested in radio and journalism, the skills and opportunity to report and produce their own multimedia story. Those chosen for the project are paired with a professional journalist who serves as their mentor.

This edition of the #NPRNextGenRadio project was produced in collaboration with Oregon Public Broadcasting in July 2020.

Our audio engineer is Patrice Mondragon.
Our illustrators are Yunyi Dai and Ard Su.
Our visuals editor is Erica Lee.
Our web producer is Robert Boos.
Our managing editor is Traci Tong.
Our digital editor is Joanne Griffith.

Special thanks to our journalist-mentors this week:

NPR’s Next Generation Radio program is directed by its founder, Doug Mitchell.