is a set of audio and digital stories highlighting the experiences of people whose lives have changed dramatically during the pandemic.

Meaghan FitzPatrick reports for NPR’s Next Generation Radio. Cailey McCandless is the program director of Teen Musical Theater of Oregon, a youth theater program based in Medford. The program, which provides a safe space for young artists, produces several performances a year. But the pandemic shut down the company’s spring show two days before opening night, forcing McCandless to come up with innovative ways to keep the production alive.

On March 11, downtown Medford, Oregon was full of magic. The Craterian, a popular theater in the community, was illuminated in spotlights, highlighting the faces of the talented young artists on stage who were dressed in colorful costumes, designed perfectly for their show.

On March 12, the theater looked very different. Due to COVID-19, Teen Musical Theater of Oregon (TMTO) postponed their show, “Children of Eden,” indefinitely. That left the cast, who had been rehearsing since January, without a spring show.

TMTO is a youth theater program for children aged 9 to 19, that puts on three shows a year, with an average cast of 60 to 65 members.The program is responsible for much of the funding that supports the Craterian. 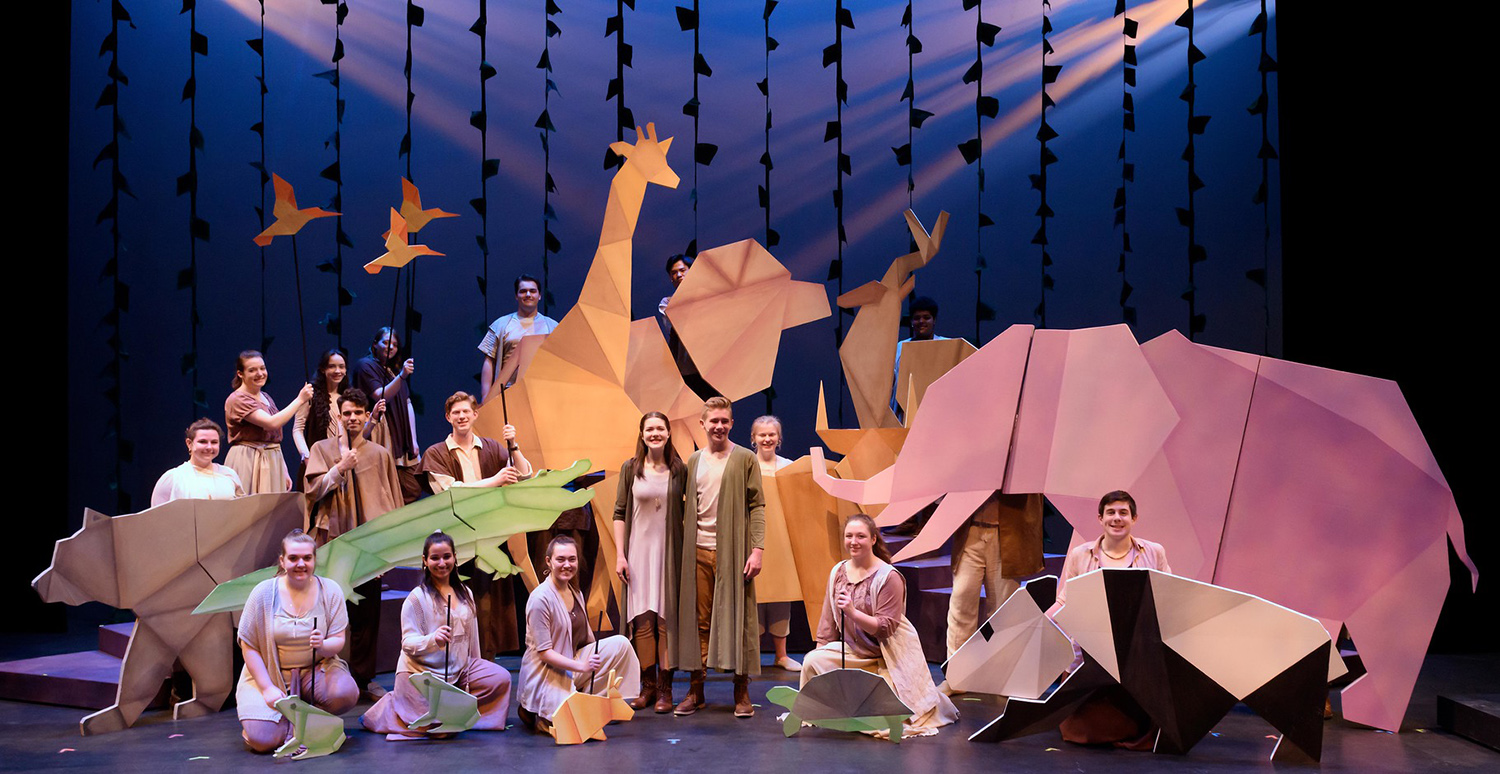 Some cast members of TMTO’s “Children of Eden” have been in more than 20 shows with the theater company. (Photo courtesy of Jim Craven)

With tickets sold, kids rehearsed and sets designed, program director Cailey McCandless knew she was going to have to rethink how this show was presented to the community.

McCandless is a TMTO alumna, having performed in a few shows her senior year of high school. As an adult, she’s now a permanent creative team member of TMTO. She said the theater company has always been a creative outlet for her.

“TMTO has sort of captured my attention and creative instincts since I became involved,” said McCandless. “It’s always been something that I’ve felt passionate about.” 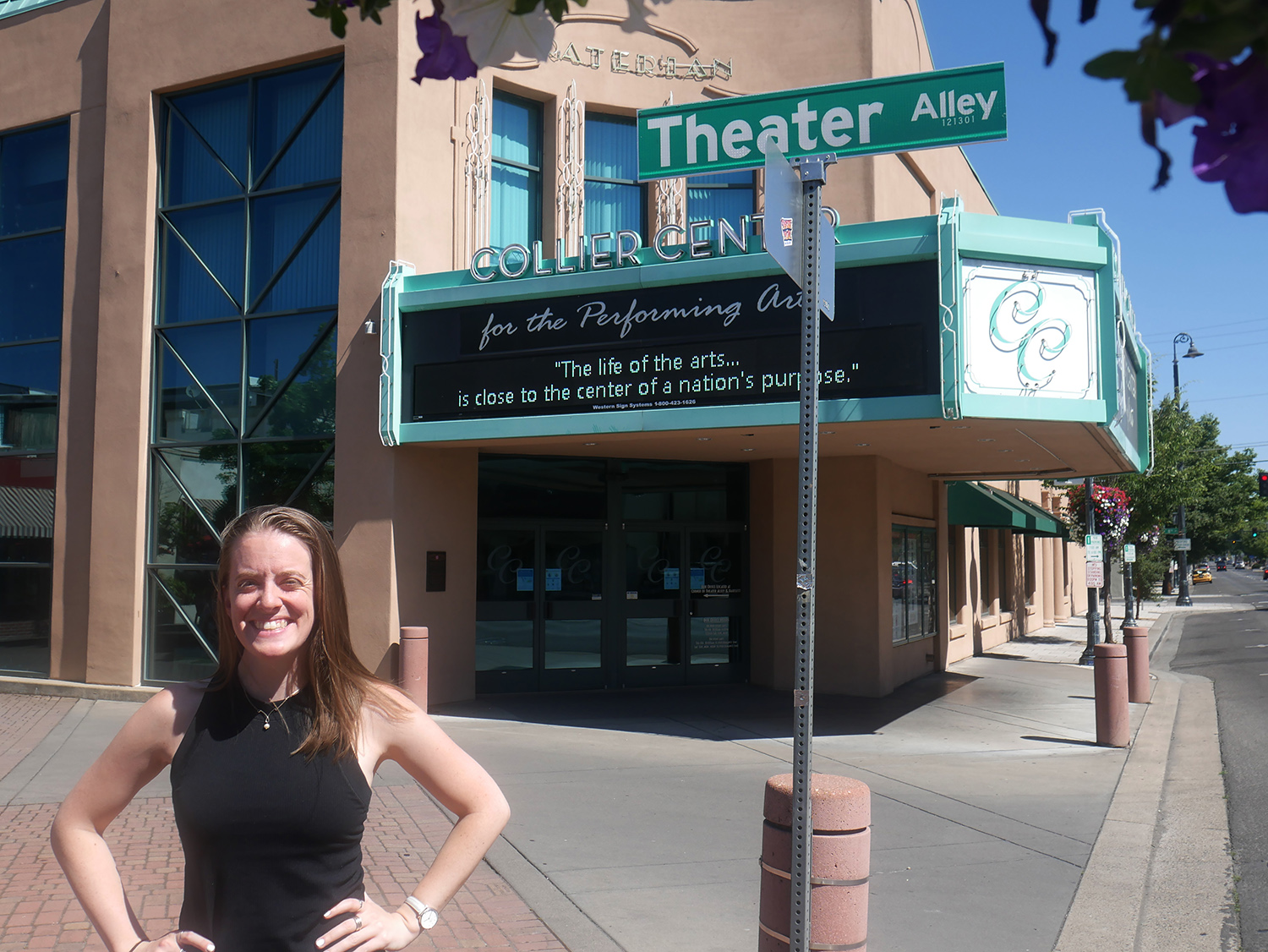 TMTO program director Cailey McCandless stands in front of the program’s home venue, the Craterian Theater, in the heart of downtown Medford. (Photo by Meaghan FitzPatrick)

McCandless said the talent of the kids accompanied with the professionalism of the creative team has resonated with the local community.

“We have all sorts of fans who come back to see our shows, not because they know anybody in the cast, but just because the program has developed such a strong reputation for itself,” said McCandless. “We just kind of keep setting the bar higher and higher with every show that we do.”

But for this spring show, McCandless and her team had to get creative with how they were going to proceed with their postponed show.

“We decided to document our show by capturing it on film, which was a completely different experience than staging something for the stage,” said McCandless.

In order to follow Oregon’s mandates regarding social distancing, McCandless had small groups of cast members return to the theater. They all wore masks while McCandless and a film crew shot the musical on cameras. Instead of the usual two weekends of shows, the process to film took several more weeks. Now they are working on the edit. All this allowed the community to still see the performance, but safely.

Naomi Medley,18, has been in ten TMTO shows, and was one of the leads in the filmed version of “Children of Eden.”  Although it was different for her, she enjoyed the process and the people.

“It was a really great way to learn about the medium in a relaxed environment. It has completely different challenges compared to live theater, with re-shooting the same scene multiple times and never coherently running through the whole story,” Medley said. “But I really enjoyed the process of it, and I’d definitely do it again.” 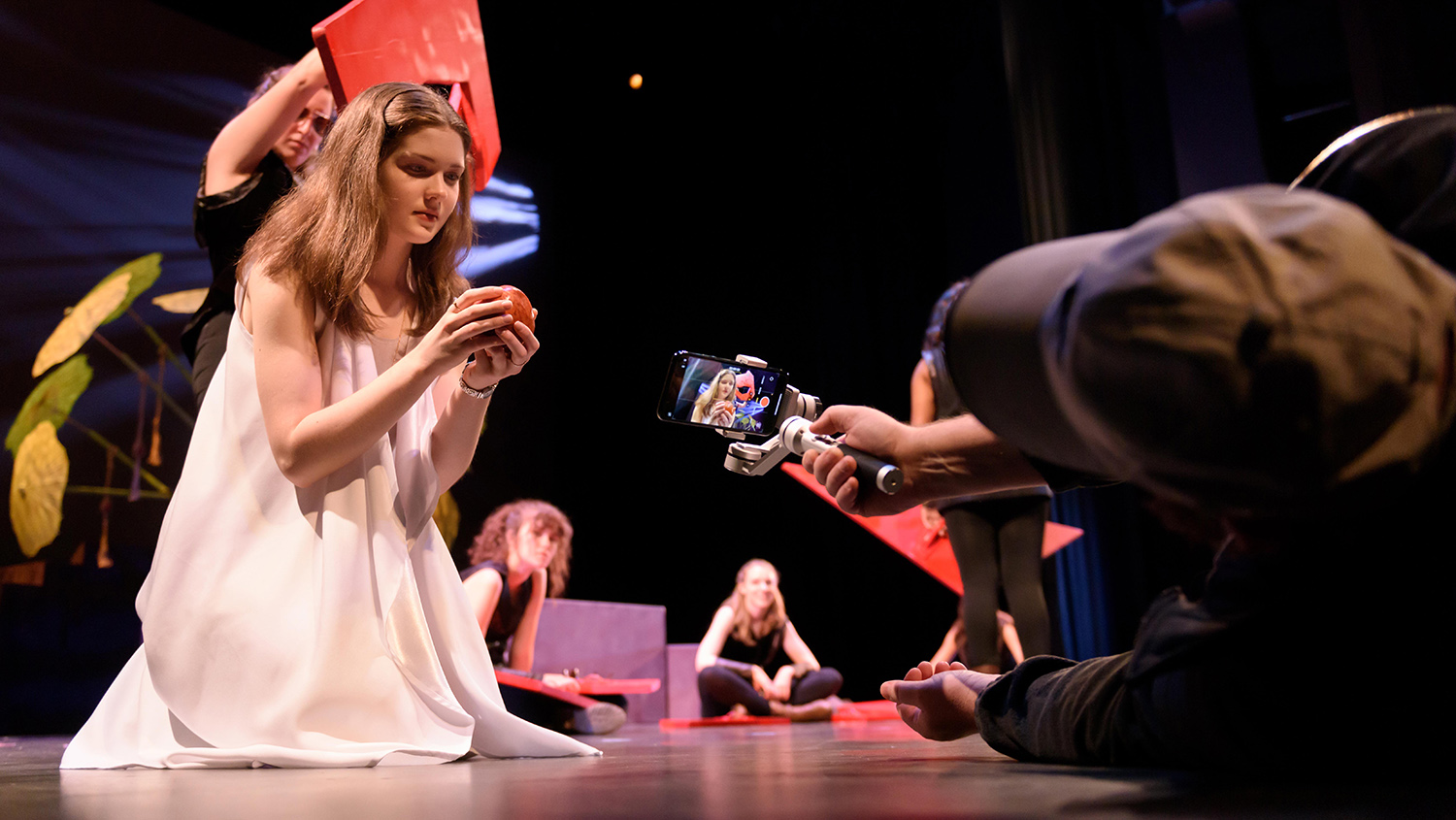 A crew member films Naomi Medley, who played one of the lead roles in the show. “The most important things I’ve learned with [TMTO has] been about working hard, living with confidence, and loving and being loved.” said Naomi Medley. (Photo courtesy of Jim Craven)

Along with filming the show, McCandless has come up with socially-distanced dance, audition and music classes both in person and online in order for TMTO members to still learn and create.

“We’re only about a week into these classes, but they’re already so rejuvenating and inspiring, just getting to be together, dance, have fun and do it in a way that is safe and feels responsible,” said McCandless. 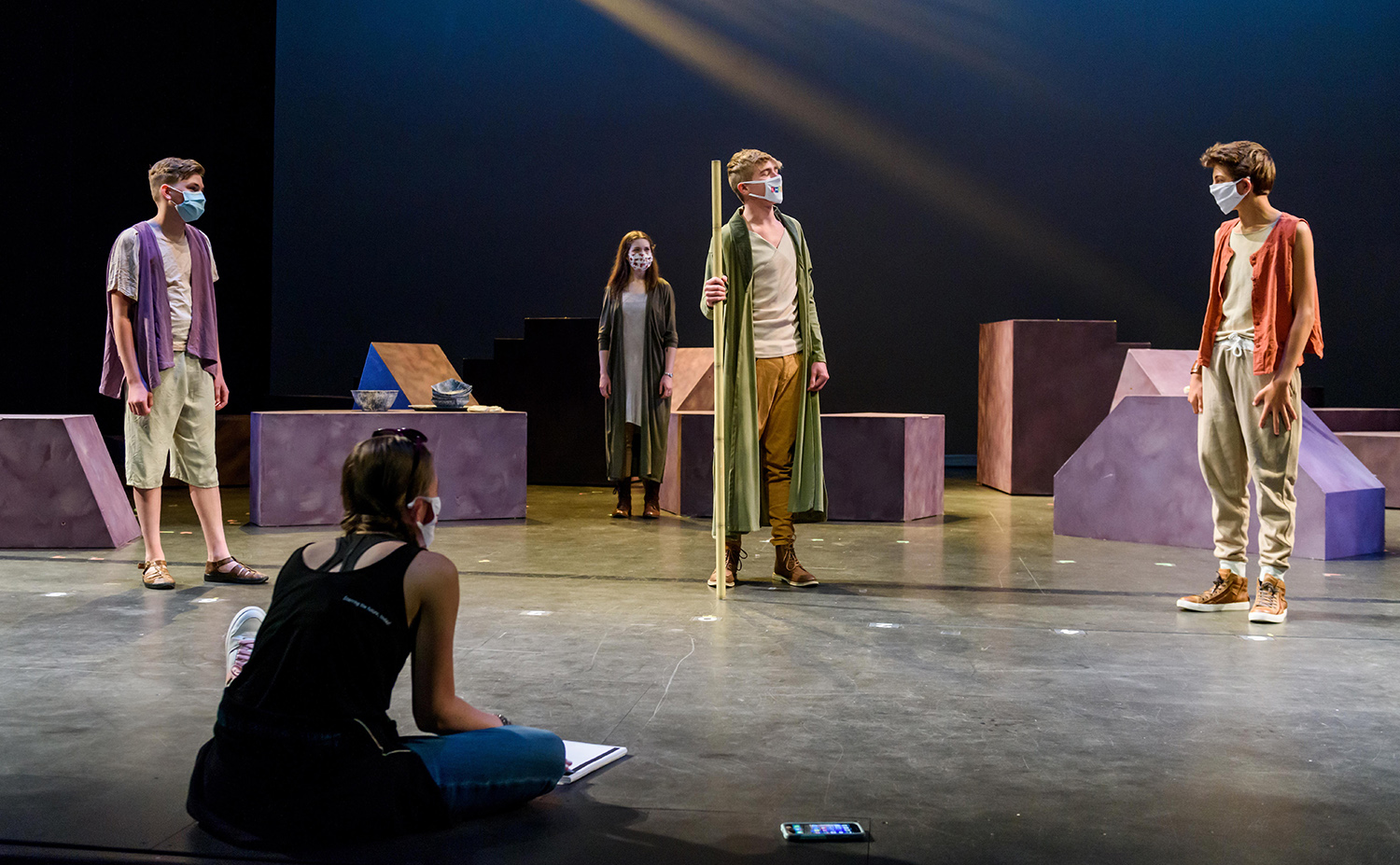 Before filming began, the creative team marked the stage with tape to remind performers to stay six feet apart.(Photo courtesy of Jim Craven)

Thanks to community support, interest from the kids and a lot of hard work, McCandless and her team are making it work, although she recognizes that the theater industry has taken a hit, even reaching New York City’s famed Broadway.

“The entire theater industry is having conversations about how long we live in this in-between universe of what we can do [and] what we can’t do,” said McCandless.

Overall, with all the rescheduling, online classes and editing, McCandless has found comfort in places she never would have looked: in song lyrics and in time spent with the kids. She’s also found a silver lining in being able to take a step back from her usually busy life.

“There’s so much that’s so easy to take for granted, and being forced to stop and look at everything from a new perspective that we could lose anything at any moment was a good reminder that this is all fleeting,” said McCandless. “I’ve paused to appreciate how much I love what I do.”

The Next Generation Radio Project is a week-long digital journalism training project designed to give competitively selected participants, who are interested in radio and journalism, the skills and opportunity to report and produce their own multimedia story. Those chosen for the project are paired with a professional journalist who serves as their mentor.

This edition of the #NPRNextGenRadio project was produced in collaboration with Oregon Public Broadcasting in July 2020.

Our audio engineer is Patrice Mondragon.
Our illustrators are Yunyi Dai and Ard Su.
Our visuals editor is Erica Lee.
Our web producer is Robert Boos.
Our managing editor is Traci Tong.
Our digital editor is Joanne Griffith.

Special thanks to our journalist-mentors this week:

NPR’s Next Generation Radio program is directed by its founder, Doug Mitchell.